My first modelling was in OO. After getting married and living in a relatively small house I modelled in N gauge for many years. Several layouts were started and never finished. Finishing things having never been my strong suit. In the early 2000's I discovered 3mm and started a layout called Chorminster which I really enjoyed doing as it started my push towards a finer more detailed side of the hobby. It fell by the wayside due to the frustrations of various supply problems at the time and my inability to produce a working chassis.

In late 2000's I discovered OO9 and built my first layout, Mospick Halt, in that scale which attended a couple of exhibitions. Around that time I also met Richard Holder and got involved with operating his layouts at exhibitions. Richard also set up an Oxfordshire Group of the OO9 Society. With a like minded group of friends I carried on tinkering with OO9, even trialling DCC for a short period of time 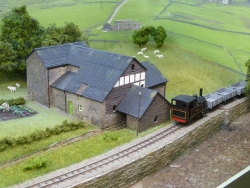 I have subsequently moved to Reading where I am now part of the Wilts OO9 Society Group and am embarking on a new layout, Melin Dolrhyd, which is the first layout I have built based on a real location.

The challenge with Melin Dolrhyd is that I have modelled it around the turn of the 20th Century and, despite there being photographs, there are always views that were never captured and so much detail still has to be guessed at.

Melin Dolrhyd has attended its first exhibition and is available for further shows.